Dolphin Plants Are The Cutest Houseplants Ever 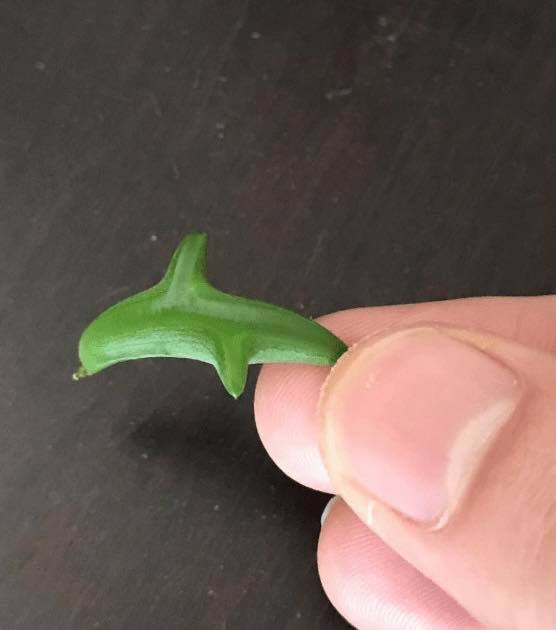 I know what you’re thinking: “Dolphin Plants? They can’t be real.” But they 100% are, and they resemble our favourite sea mammals so much that they are genuinely named after them.

Dolphin Plants, also known as a String of Dolphins, are trailing succulents that look like a pod of dolphins leaping through the air. The plant, scientifically known as Senecio Peregrinus, is a cross between String of Pearls and Candle Plant, and the result is simply awesome.

Dolphin Plants grow in a very specific way, as a stemmed vine which sprouts curved leaves in the shape of a dolphin’s fin.

They first gained popularity in Japan, but have since spread and become a worldwide phenomenon.

Though not the most common plant species, Dolphin Plants can be purchased online in pretty much any location. They may be a little pricier than your average houseplant due to their rarity, but it is definitely worth it in our opinion.

It is possible to buy seeds, but this isn’t necessarily recommended, as there’s no way to tell that the leaves will come out fully-formed and end up dolphin-shaped when growing from scratch.

If you’re a beginner at growing plants, don’t worry as Dolphin Succulents are easy to look after.

They like living on a windowsill or anywhere near a window, so long as they get a fair amount of light.

Like most succulent plants, Dolphin Plants shouldn’t be watered too often, ideally just once a week in summer and once a month in winter.

The Dolphin Plant’s low maintenance lifestyle means you can maintain its cute appearance, even if you occasionally forget about looking after it.

As a rare plant, many people have not heard of the String of Dolphins, and even less have seen one up close, so you’ll definitely impress your friends by showing it off if you get hold of one.

Succulents are always a great way to liven up your home, but even better is a succulent shaped like an adorable animal.

Alternatively, how about growing plants in your car? Take a look at the possibilities here.

Dolphin Plants Are The Cutest Houseplants Ever