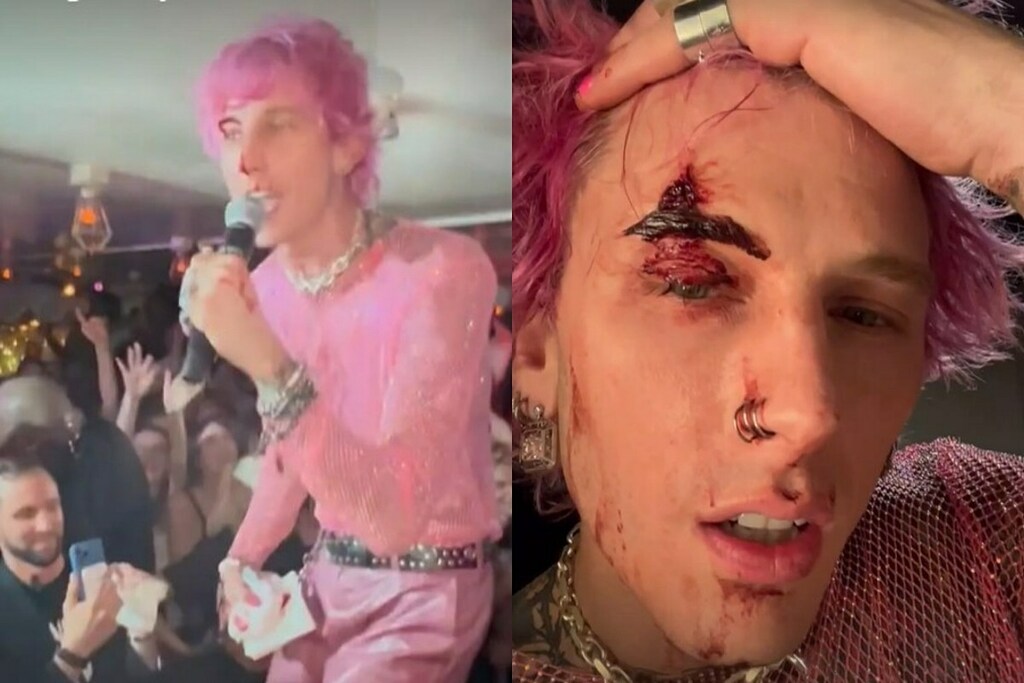 The musician celebrated his sold-out NYC show by breaking a champagne glass on his face and proclaiming, ‘I don’t give a f**k, bro. I don’t give a s**t.'”

“You were doing, saying and encouraging despicable things that no one should be doing.”

Kelly, who was wearing a grey prison uniform, did not seem to respond while his punishment was being given.

The transformation of Machine Gun Kelly from rapper to punk rocker has been taken very seriously.

The 32-year-old was observed Tuesday night in New York City during an after-party at Catch Steak smashing a champagne glass on his face. According to Page Six, as guests looked on, the flute broke, causing Kelly’s forehead to begin oozing blood. Rolling Stone claims that Kelly posted video of the event on his Instagram account. He was seen standing on a table at the steakhouse and breaking the glass on his head in the opening tape. In the following video, he sang a portion of “My Ex’s Best Friend” while having blood pour down his face.

The bloody incident happened after a sold-out performance by Kelly as part of his “Mainstream Sellout” tour, which started on June 8 in Austin, Texas. Landon Barker, the drummer’s son, joined him on stage on Tuesday, just before the 46-year-old drummer was taken to a hospital in Los Angeles for an unspecified reason.

Regarding Barker’s hospitalisation, Kelly has not yet made any remarks.

Kelly has never shied away from inflicting himself with harm for the enjoyment of others, as we have seen during his brief cameo in this year’s “Jackass Forever” film. Despite the fact that several people who observed the glass-smashing were heard shrieking in shock.

Additionally, Kelly has made known his seeming fascination with blood, something he and his fiancee Megan Fox seem to share. According to recent claims made by the couple, Kelly wears a bottle of Fox’s blood around his neck, and they both consume each other’s blood.