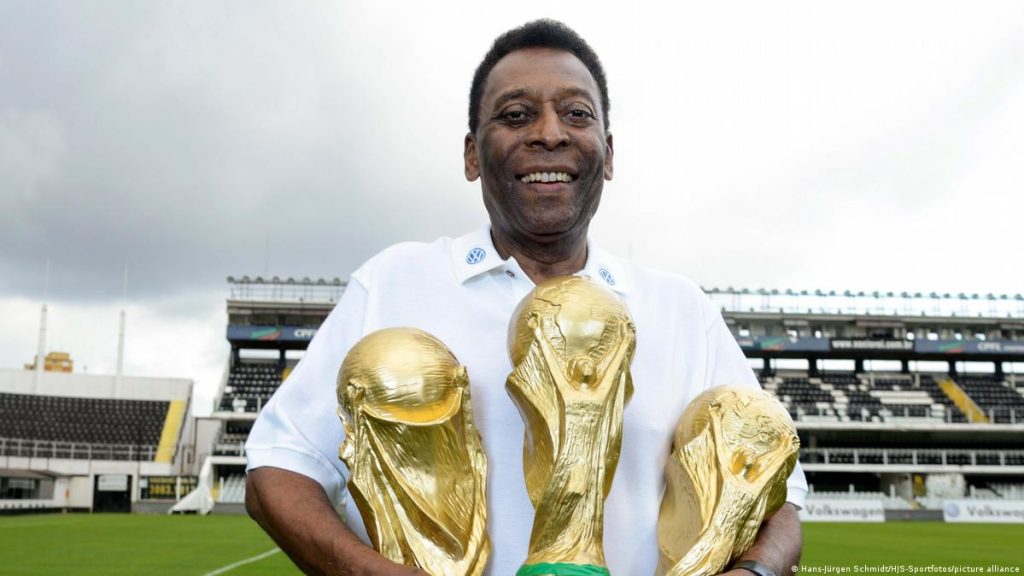 Pele, probably the greatest player in football history, passed away at the age of 82.

In recent years, he has experienced kidney and prostate issues.

In September 2021, the Albert Einstein Hospital in Sao Paulo performed surgery to remove a colon tumour that had been found during normal examinations. In the final days of November 2022, he was readmitted to the hospital.

Kely Nascimento, his daughter, often posted updates on social media from the hospital to inform her followers of her father’s status.

She wrote: “On Thursday, I uploaded a photo of what looked like Pele’s family’s hands on his body in the hospital.” “We owe everything we have to you. You have our undying love. Peace be with you.”

The hospital confirmed that Pele died “due to the failure of multiple organs, a result of the progression of colon cancer associated with his previous clinical condition”.

The Brazilian Football Confederation said: “Pele was much more than the greatest sportsperson of all time.

“Our king of football was the greatest exponent of a victorious Brazil, who was never afraid when faced with difficulty. He promised his father a World Cup and he presented us with three.

“The King gave us a new Brazil and we are so thankful for his legacy. Thank you, Pele.”

Edson Arantes do Nascimento, better known as Pele, became a global star when, aged 17, he helped Brazil win the 1958 World Cup in Sweden, forcing his way into the starting line-up by the knockout stages.

He scored the only goal in a 1-0 victory over Wales in the quarter-finals, a hat-trick against France in the semi-final and two in a 5-2 triumph over the hosts in the final.

At the age of 15, Pele made his club debut for Santos, scoring in a 7-1 victory over Corinthians de Santo André.

It was the first of 643 goals he would score for the club in official tournaments over the course of 19 years, while Santos claims the number is actually higher than 1,000 when exhibition matches are included, many of which were against illustrious European opposition.

Pele reportedly scored 1,283 goals in 1,367 games, according to the Brazilian Football Confederation and Santos, although Fifa believes it was 1,281 goals in 1,366 games.

Pele, then 21 years old, opened his team’s 1962 World Cup campaign with a magnificent individual goal in a 2-0 victory over Mexico, but he suffered an injury in the following game and had to watch as his team successfully defended their championship from the sidelines.

His most famous World Cup victory was the third of a trilogy. He was the focal point of a sensational attacking team that swept to the title in 1970, defeating Italy 4-1 in the final after being disqualified from the 1966 tournament in England.

Pele’s magical moments have transcended eras and defined the history of the sport, from his tears of joy on teammate Nilton Santos’ chest to his embrace with England captain Bobby Moore.

“There are composers like Beethoven and the rest. There is Pele and the rest in football “In 2000, he stated.