12 Times Movies That Used The Same Set in Different Films 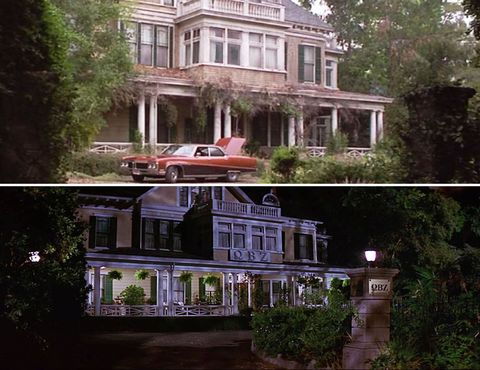 When we are watching a movie, we are always naturally alert to the characters and the conversations they are having, so much so, we may not always pay attention to what surrounds them and the background. That’s why, at first glance, very few people notice those times when sets or props are repeated in separate movies.

At Film Junkie, we have put together a list of some occasions when directors showed us that old things can always serve us again.

When movies need a sophisticated, classic setting, Hatfield House is without a doubt the place to be. This has been the location for many films, including Tomb Raider, The King’s Speech, Sherlock Holmes, and Rebecca. The series, Bridgeton, and The Crown also had some very memorable scenes filmed here.

The Quality Cafe, located in LA, has been home to many scenes and conversations in different films. The number of recognised movies or series that were shot here is crazy — some have even been filmed from the same seats. Among them, we have spotted (500) Days of Summer, Se7en, The Seven Deadly Sins, and Mr. & Mrs. Smith. It was also used in the series, Mad Men.

Ordinary props may go unnoticed by the eyes of many people. However, there is always a film fanatic like us who will notices these little curiosities. In this case, someone noticed that the same newspaper has appeared in dozens of movies and shows, such as Married… with Children, Modern Family, and No Country for Old Men.

Vasquez Rocks is a natural park located in LA and is open for people to visit. It was also the backdrop to scenes of many different films. Its rocks were part of the scenery in Star Trek IV: The Voyage Home and Star Trek: The Beginning, among others of the same franchise. They also appear in a Friends episode, “The One with Joey’s Big Break.”

In a scene from the movie, Ocean’s Eleven, we can see that Brad Pitt wears a wig that disguises himself. This was surprisingly actually the same wig worn by Mike Myers during the filming of Austin Powers: International Man of Mystery.

When we think of American movies, we always think about the huge high schools attended by teenagers. One of the best-known campuses is that of John Marshall High School. This is where movies like Pretty in Pink, School of Rock, Bachelor Party, and even A Nightmare on Elm Street took place.

In the film, True Lies, there is an intriguing scene in which Arnold Schwarzenegger is seen piloting a jet. This one was made especially for the film and was kept together until 2012 when it appeared in The Avengers.

One of the things that Sam Raimi’s movies have in common is the expected cameo of the Oldsmobile 88 car, dubbed “The Classic” by the director. We can see it in Spider-Man, Army of Darkness, and The Gift.

In the opening scene of Alien, we can see a coffee grinder mounted on the wall. This model of machine was used to create Mr. Fusion, which happens to appear in Back to the Future Part II.

Many movie fans will remember Diagon Alley, which made its first appearance in Harry Potter and the Sorcerer’s Stone. The set where it was filmed was also used to transform into the barricade scene in the movie Les Misérables. How cool!

In 2001: A Space Odyssey, EVA pods served as transporters. This machine can be seen in the movie Star Wars: Episode I — The Phantom Menace in the scene set in Watto’s junkyard.

Both Back to the Future and Bruce Almighty have scenes that take place in the same location. This particular location is known as Courthouse Square, located in Universal Studios. This location has been used in many other films, such as Gremlins, Casper, and The Cat in the Hat.

You can actually visit some of the Harry Potter filming locations too!

12 Times Movies That Used The Same Set in Different Films