This Artist Disneyfies Peoples Photos Of Their Pets 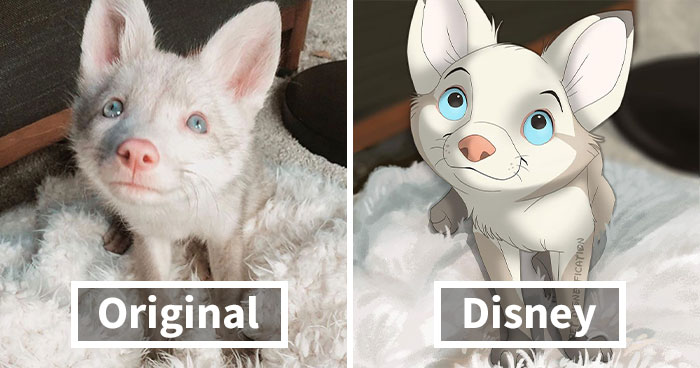 It’s no secret that Disney cartoons and their protagonists influenced a lot of people’s lives. Some of the cutest animal characters, with their large eyes and sweet smiles, taught us how to be caring, generous, and brave. So it’s no surprise that many people want to view their favourite fuzzy pets as vibrantly animated characters.

It is made possible by one artist, Isa Bredt, a 23-year-old illustrator from the Netherlands. She is the creator of the popular Instagram account “Pet Disneyfication.” She’s been turning photos of people’s dogs into Disney-style artworks since 2014, and it’s a whole new level of sweetness.

From her account, we’ve gathered some of the best drawings of cats, dogs, bunnies, and other animals. Continue scrolling, upvote your favourites, and don’t forget to read our earlier article on her here!

Sociologists coined the word “Disneyfication” to characterise the alteration of objects or places to resemble Walt Disney theme parks and resorts. Our beloved pets are brought into the world of Disney-like animation in this case, and it’s very charming.

Isa Bredt has always loved animals and painting, so combining the two and becoming a pet portrait artist was a no-brainer. Her major inspirations, according to her website, are ancient 2D animated works by Disney, Dreamworks, and Don Bluth. “I attempt to capture an animal’s spirit in my photographs,” she stated, “with the twist that they appear like they could feature in their own animated movie.”

She has been drawing since she was a child, and at the age of 16, she began posting her work on Reddit. After that, the project evolved at a breakneck pace. Bored Panda got out to the artist to learn more about her creative process and how it has developed over time.

When asked what part of the process she enjoys the most, Bredt said it’s the beginning: “Looking at all the photographs, discovering things that make each animal unique, and then doing the initial design.” I enjoy figuring out what characteristics are unique to the pet I’m sketching.”

The artist agreed that there haven’t been any big changes since our last conversation, other from the fact that she has really improved. “Painting my backdrops, in particular, used to be a huge effort,” she explained. “It’s still a struggle, but the end results are a lot better.”

Bredt doesn’t just execute commissions; she also works on her own projects, such as weaving her magic on our favourite Instagram animals or any other furry pals who inspire her. As a way of giving back, she began Disneyfying animals from shelters. While she cannot recall how she came up with the idea, she was certain that she wanted to use her platform for a good cause.

If you love animals you will also love this.

This Artist Disneyfies Peoples Photos Of Their Pets