The Truth Behind The Winchester House Movie 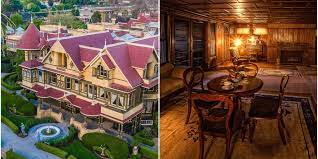 The true story of ” The Winchester House”

After tragedy struck in her life, taking away her beloved husband and only daughter, Sarah Winchester seeking help and comfort went to a medium, who told her that a curse had fallen on her family and that the next victim was her.

The origin of this curse was because Sarah’s husband owned a huge, multi-million-dollar weapons company, and in revenge for all those souls who died from Winchester weapons, the members of the Winchester fortune would be tormented to death.

Although the curse could not be destroyed, the medium told Sarah that if she wanted to stay alive, she would have to move to a new house, a house that she would have to build for the spirits without ever finishing it. From 1884 to 1922 (when Sarah died) there was not a day that something was not being built in the Winchester house.

The house was made to please the spirits. Many of the ideas of the constructions were given by the spirits themselves, some details of the house were built so that the spirits stayed happy. The house needed plenty of light, so that the spirits would not feel overwhelmed by not being able to show their own shadow; another detail is that there were almost no mirrors, since the spirits hate mirrors because their reflection makes them disappear.

It is not known if it is by coincidence or by choice but the number 13 seems to be very important in the house: there are 13 stairs with 13 steps, 13 hooks in Sarah’s closet, 13 bathrooms and candlesticks for 13 candles and even Sarah’s will was divided into 13 parts. In honor of that mysterious 13 number, every time there is a Friday 13th, the bells will ring 13 times at 1:00 pm.

Many workers and visitors to the house have witnessed the paranormal phenomena that occur like doors being closed and things moving inexplicably. People can also hear noises and voices, feel as if they are being touched, sometimes they have seen one or more spirits, it is even said that Sarah’s spirit is one of the most to manifest.

It is said that the “House of the Winchester Mysteries” is the most haunted place in the United States, this mansion has become a tourist destination, which you can visit by booking a tour. One of the warnings for those who dare to visit the house, is to never separate from the group because they do not assure that you can be found.

The Truth Behind The Winchester House Movie