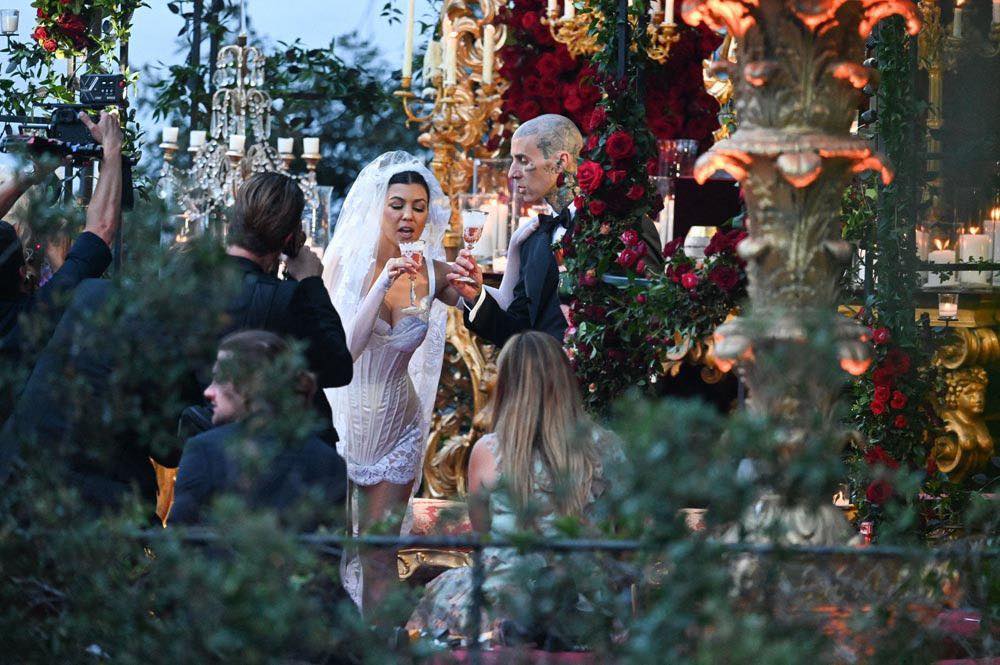 This weekend, Kourtney Kardashian and Travis Barker will marry in a grandiose Italian wedding in front of their relatives and friends, who have gathered in the lovely village of Portofino for the festivities.

In front of friends and family, Kourtney Kardashian and Travis Barker married in a magnificent Italian ceremony.

The couple, who got engaged in October, are getting married on Sunday at the mediaeval Castello Brown fortification in Portofino, with Kourtney looking lovely in a white Dolce & Gabanna gown with a cathedral veil.

Kourtney Kardashian, 43, and Travis Scott, 47, of Blink 182, have rented out Domenico Dolce and Stefano Gabbana’s beachside compound to celebrate in style with their family friends.

The entire Kardashian-Jenner and Barker family has been invited, and they have been seen having a good time in the lovely coastal town in the lead up to the event.

Following the wedding ceremony, Kourtney shared a series of Instagram photos in which she talked about her future with Travis.

As she kissed Travis at the altar after exchanging vows, the reality star boldly declared “happily ever after.”

Over the weekend of celebrations, Kris Jenner and Kourtney’s sisters Kim, Khloe, Kendall, and Kylie have been photographed wearing a variety of eye-catching clothes as they move between several yacht parties and five-star restaurants.

Alabama, Kourtney’s new stepdaughter, was the first to share photographs from the ceremony on social media, posting a few on her Instagram Story.

She posted a snapshot with Kourtney, who was wearing her lace veil, as well as a photo and video of her father Travis at the altar as he married his new wife.

Kris Jenner wore a pink gown and held red roses as she accompanied her daughter down the aisle.

Kim Kardashian arrived in a black gown with her hair lighter than ever, continuing the gothic trend created by Kourtney in the lead-up to the big day.

Kourtney and Travis have walked down the aisle three times in the last two months, most recently at a wedding in Europe.

Fans were astonished when the couple was photographed getting drunkenly married after partying at the Grammy Awards in April.After she and her beau had downed tequilas, the boozed-up bride eventually revealed it was a hoax.

“Practice makes perfect,” Kourtney teased on Instagram as she uploaded photos from their Elvis-themed party in Sin City. A month later, at a very different second wedding in Santa Barbara, the infatuated couple said their vows for real.

The couple tied the knot in a low-key ceremony at a rural courthouse, with no members of Kourtney’s famous family or her three children present.