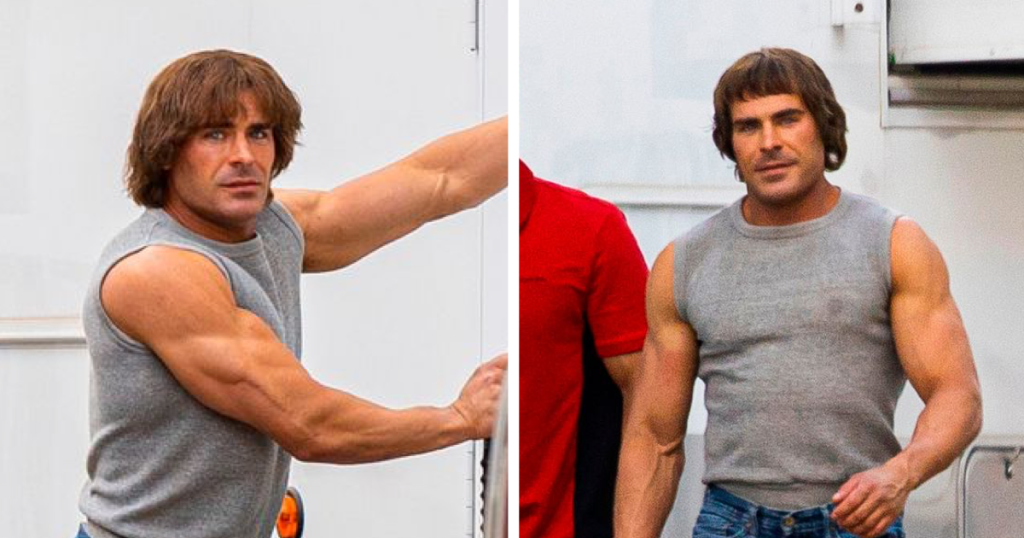 Fans could not recognise Zac Efron as he flaunted his new appearance, which included enormous biceps and a pudding bowl hairstyle.

Alongside British actress Lily James, the Hollywood actor is currently busy filming his newest project. He appears to have significantly bulked up for the part.

Zac, 35, displayed his hench new style as he walked around the Louisiana set of The Iron Claw wearing a knitted grey tank top and skin-tight denim cut-off shorts to show off his super-tanned, toned legs.

In the pictures, the star of The Greatest Showman was also sporting an extremely angular pudding bowl-style haircut, which made him look very different from the neat appearance fans are more accustomed to seeing him in.

The Von Erich family, who were wrestling icons in their 1960s prime but went on to be devastated by tragedy after tragedy, is the subject of The Iron Claw.

The athlete, who is currently 65 years old, had held the WCWA World Heavyweight Championship.

Despite never having seen or spoken to the actor, he earlier given his blessing for Zac to be chosen to convey his narrative.

He told TMZ: “He’s got some tough work ahead of him, but I saw a picture of the guy, he looked great. I never looked that good. I think he’s gonna do great. My daughters showed me his photo and he looked great. He really must be working out hard.

“My daughters love him and they think he’s the right guy. I’m excited to watch it.”

Father of Kevin, Fritz Von Erich, real name Jack Adkisson, began his career in the 1950s and 1960s by portraying a Nazi wrestler.

After that, he became a promoter for World Class Championship Wrestling, and the film that bears his famed finishing grip was named after him.

Fritz had a successful profession, but sadness dogged his life, as five of his six boys passed away at a young age.

Only Kevin had outlived him by the time he passed away in 1997 at the age of 68.

When he was six years old, Jack Barton Adkisson Jr. accidentally electrocuted by an exposed wire and drowned in a puddle, killing him.

David, his third son, was 25 years old when he passed away on February 10, 1984, allegedly from a painkiller overdose while on tour with All Japan Pro Wrestling.

His actual cause of death, according to the family’s later claims, was burst intestines brought on by acute enteritis.

Then, seven years after having his foot amputated as a result of a motorbike accident, Kerry, his fourth son, committed himself in 1993 at the age of 33.