Don’t Look Up – The Most Star-Studded Cast Ever 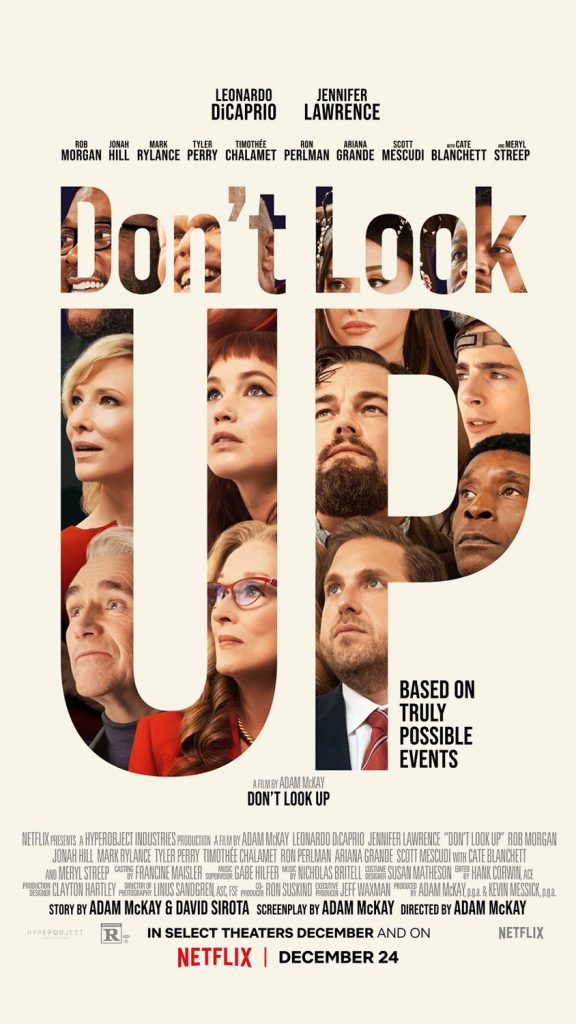 Get ready for the most star-studded cast of the year.

Streaming service Netflix is no stranger to starry prestige films after successes such as The Irishman and The Trial of the Chicago 7 – but Don’t Look Up might just be their starriest yet.

Now Oscar-winning director Adam McKay brings us Don’t Look Up – a satirical comedy that takes a classic disaster movie premise of a comet heading towards Earth, except this time, no one seems to care.

It’s up to Leonardo DiCaprio and Jennifer Lawrence to go on a press tour of all things to warn the public – where they encounter a who’s who of acclaimed actors including Cate Blanchett, Timothée Chalamet, Jonah Hill and Meryl Streep.

How is that for an Oscar-adorned cast?

Here’s everything you need to know about Netflix‘s Don’t Look Up.

The film will then receive its streaming release on Netflix worldwide on December 24, 2021.

A nice Christmas watch at home for the family (if apocalyptic comedies are their thing!).

The star-studded comedy continues the trend of releasing some film content in cinemas prior to a wider streaming release.

Leonardo DiCaprio and Jennifer Lawrence lead an absolutely packed cast, with both actors returning to a lead role after several quiet years.

If that wasn’t enough for us, legendary actresses Cate Blanchett and Meryl Streep will also be appearing in the film, as well as singers Ariana Grande and Scott Mescudi aka Kid Cudi.

A cast this impressive is likely in no small part due to the success of director Adam McKay, whose previous films The Big Short and Vice were universally acclaimed and received several Oscar nominations.

What is Don’t Look Up about?

A film unlike any other, Don’t Look Up follows astronomy grad student Kate Dibiasky (Jennifer Lawrence), and her professor Dr. Randall Mindy (Leonardo DiCaprio) as they discover a comet on a direct collision course with Earth.

Understandably, they take this news to President Orlean (Meryl Streep) and her fawning Chief of Staff Jason (Jonah Hill) – who, to their surprise have heard enough apocalypse stories and are indifferent on the matter.

Therefore, with the help of Dr Oglethorpe (Rob Morgan), Kate and Randall must go on a press tour to save humanity, which puts them on a collision course with all sorts of BIG media personalities including morning show hosts Brie (Cate Blanchett) and Jack (Tyler Perry). With only six months left until impact, it soon no longer funny how unwilling people are to pay attention – what will it take for the world to look up.

Were obsessed with new Netflix releases!

Don’t Look Up – The Most Star-Studded Cast Ever